I managed to find a Dragon Ball game for the Famicom that I didn’t previously have! This time for Famicom Impressions I tried out Dragon Ball Z Gaiden: Saiya Jin Zetsumetsu Keikaku ドラゴンボールＺ 外伝 サイヤ人絶滅計画 (BA-DBZ4) released by Bandai in 1993. Dragon Ball games usually have pretty colorful artwork containing silly anime characters with funky hair, and the manga/anime series has a pretty big fan base from what I understand.. I’ve never been that into anime or manga though.. but I’ve always hoped for a good Dragon Ball game! This is not it though.. 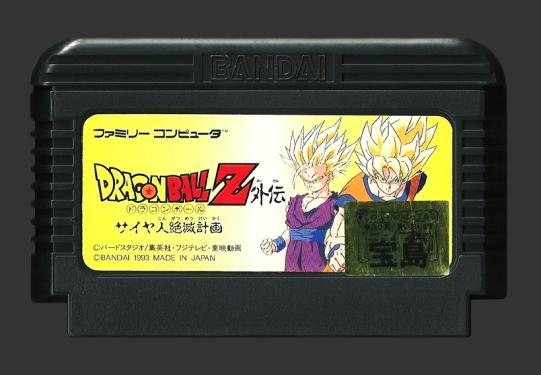 From what I’ve figured from the series the Dragon Ball story is about guys that are flying and fighting. This game is pretty much based on that as well. Unfortunately the action is not controlled by you, it just has a lot of cool looking fighting cutscenes. Instead you control the characters like in an RPG, choose which card to use, pick an action and so forth.. I hate menus.. I want live action!

At least the game has some pretty rad tunes ^_^ Check out the video below to listen to some of the music :) It’s awesome! Apart from that I wouldn’t really say it’s playable or fun without an extensive knowledge about Dragon Ball lore or the Japanese language.. In the main fighting menu the only thing I understood was ステータス (status) and アイテム (item). The others seemed to be various attacks or card picking.. I have no clue what the cards are about, some of them seemed to give me special attacks.. at the end though I just fought for my blonde dude to get killed so I could turn it off XD

I got to see a dragon though, who gave me free cards! The game really has some nice sprites :)

Check out my first attempt at this game here, and listen to the nice music at least ^_^