Oh no, it’s time for another sports game! It’s not an RPG this time though, just PURE AMERICAN FOOTBALL in Tecmo Super Bowl テクモスーパーボウル (TCF-4U) on Famicom, released in 1991. 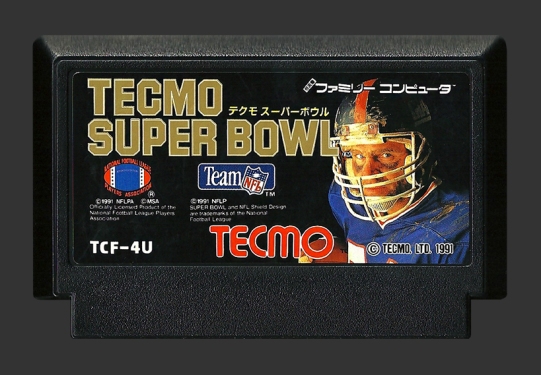 It has some nice graphics in the intro, and I really kind of liked the music in game, the little that I got to hear of it.. because every time something happened on the field (which I felt I had no control over what so ever) the freaking song started over again! The stupid screen popping up every 10 seconds asking me for a strategy is SO ANNOYING! I would call this a strategy/sport-simulator game, no action at all, I got control of the ball (or whatever you call it in American football) once, and no matter where I tried running the opposing team caught up and threw themselves on top of me, suffocating whatever nice feelings I ever might have felt towards this game >_< booooo

At least no Japanese language is necessary to play this, only an incredible infatuation with sport-strategy ;P

Here’s a video, judge for yourself.

A guy recently contacted me because he saw that I had some games for trade on my blog, we started emailing back and forth and he actually had a bunch of Famicom games and a few other games that I didn’t have, so we made a nice deal ^_^ He received a few boxed Sega Mega Drive and Master System games for a few loose Famicom and Game Boy carts. I’m really happy with the trade, especially with the cute handheld I also got! It’s TETRIS :D And I played it for almost 2 hours when it first arrived XD

What’s odd about this Tetris game is that it only gives you points for each block you place, you don’t get points for making rows or even a “Tetris”.. it’s seems to be more mission based, once in a while you level up and they clear the board and give you a piece of the rocket it seems :) Then it starts over, slightly more difficult. It also took a while to get into the controls, since it doesn’t have an up or down button, at least down I’m used to pressing when I wan’t them to go a bit faster, here there’s only left and right. Instead there’s a drop-button where A or B usually sits, I accidentally pressed this one so many times and just threw the piece down XD It was a nice challenge though! 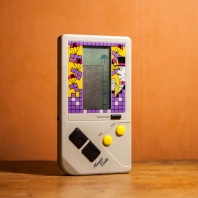 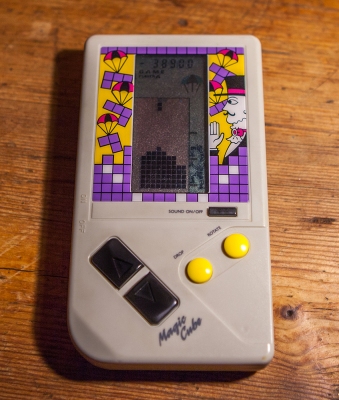 The Famicom games I got were mainly the ones you’ve gotten to see my first Famicom Impressions posts of ^_^ There’s yet another one coming soon ;D

Suikoden Tenmei no Chikai and Tecmo Super Bowl for Famicom

I picked a bunch of Game Boy games that I thought looked interesting, these Japanese carts still deceive me though XD Only a handful were playable, the rest were mainly RPGs or some kind of strategy or weird Japanese game that was just boring.. Maybe I should start making Game Boy impressions as well :) 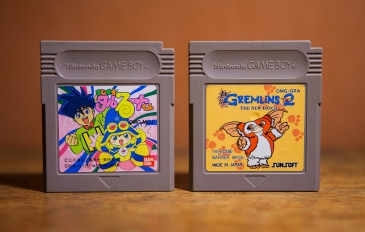 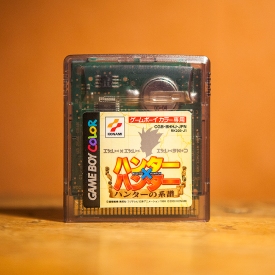 The final one  among the pictures above is a game by Konami called Hunter X Hunter: Hunter no Keifu, not to be confused with Hunter X Hunter: Kindan no Hihou. I briefly looked up the gameplay beforehand, which I usually never do, and I thought this was an awesome Castlevania-like sidescrolling platformer (which Kindan no Hihou is), but this one is not that… I don’t even know what genre this specifies under.. RPG/Strategy/walk-around-pointlessly-on-grids-without-any-action-what-so-ever?!? Anyway, below is some gameplay from it.. it has some nice music that quickly becomes repetitive, but apart from that I’m completely lost to it’s purpose.. I have since ordered Hunter X hunter: Kindan no Hihou through eBay, can’t wait for that one to arrive! :D

Next up on Famicom Impressions is a racing game called Nakajima Satoru F-1 Hero 中島悟F-１ヒーロー (VRE-F1), released by Varie in 1988. 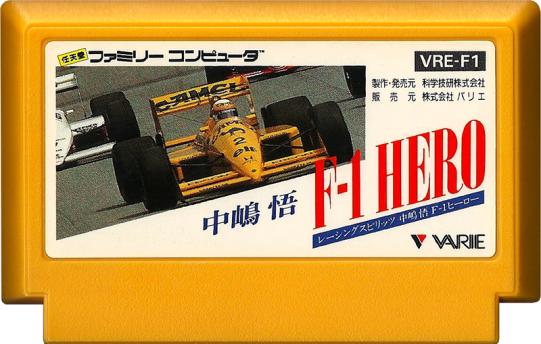 I’m not that into racing games, but I gave it a shot.. You can choose between “Warming Up”, “Battle Mode” or “Grand Prix Mode”. I began with Warming Up, then I got a guy, who I presume was Nakajima Satoru, explaining the stage I picked and all the tips and tricks of how to get around the corners. This was all in Japanese though so it didn’t do me much good XD It was almost impossible to stay on the track! I haven’t played much racing games, but the only one I can compare it too is Super Monaco GP on Sega Mega Drive which is WAY easier in comparison! Here you only had two buttons, accelerate and break, and I couldn’t figure out what I did wrong in the corners, I tried button mashing the steering, I tried speeding up and slowing down, breaking, releasing.. nothing seemed to work..

Now that I come to think about it, it’s pretty similar to Super Monaco GP on Sega Master System which I only tried out once with my friend Becki, and I completely sucked at that too XD I even have video proof of that here >> if you fast forward 10 minutes into the clip you’ll get right to it ^_^

After this I went into Battle Mode. At first I assumed it was two players, since one wasn’t moving, after a little bit I realised I WAS THE ONE not moving! I didn’t understand why so I quit and went on to Grand Prix Mode.. Then my car wouldn’t move either! Until I realised that I had to use up and down to shift gears all of a sudden. Why wasn’t this in Waming Up mode?!

After having qualified with the shittiest time it went on to the competition, I was looking forward to racing against other cars.. but alas.. all of a sudden I’m not in control anymore?! An AI has taken over my car and is driving it extraordinarily awesome! Why?? Maybe they felt sorry for me being so shitty at this game… :/

See my complete failed attempt at this game here:

Out of the last couple of Famicom games I picked up, this was the most playable, until the 2nd stage at least…. This is the Famicom Impression of Pooyan プーヤン (HFC-PO) released by Konami in 1985. An arcade-like platform game. It was I think an arcade game before it was ported to console. You can really tell the difference between games released in the more than 10 year span of the Famicom’s lifetime. This one is from 1985, and the Dragon Ball Z game I made an impression of yesterday is from 1993. Just compare the graphics! And this is Konami, which has given us amazing things such as Castlevania, TMNT, Parodius, Contra, Crisis Force and many more..  most of these games are from the very late 80’s to the early 90’s though.

So basically the game is about shooting the balloons that hold the wolves so that they fall to their death instead of climbing up the ladder to eat you and your family alive. Fairly easy concept, but there’s loads of wolves coming down simulateously, and eventually they get different colored balloons, some will shoot back at you so you have to dodge as well. Once I got to stage two though I got stuck. HOW THE HELL DO YOU SHOOT THE BALLOON OF THE PINK WOLF?!?!? As you can see in the video below the pink wolves block every single arrow I shoot at them! >_< Since I couldn’t kill them 5 new enemies spawned every time I let one slip, and there was always a new pink one there! It was destined to fail..

Apart from that no Japanese language is needed to play this game, it’s not the best game on the Famicom, but certainly not the worst, however I’m fairly sure it’s the worst Konami game every made >-<

Here’s the video of my firtst attempt:

I managed to find a Dragon Ball game for the Famicom that I didn’t previously have! This time for Famicom Impressions I tried out Dragon Ball Z Gaiden: Saiya Jin Zetsumetsu Keikaku ドラゴンボールＺ 外伝 サイヤ人絶滅計画 (BA-DBZ4) released by Bandai in 1993. Dragon Ball games usually have pretty colorful artwork containing silly anime characters with funky hair, and the manga/anime series has a pretty big fan base from what I understand.. I’ve never been that into anime or manga though.. but I’ve always hoped for a good Dragon Ball game! This is not it though..

From what I’ve figured from the series the Dragon Ball story is about guys that are flying and fighting. This game is pretty much based on that as well. Unfortunately the action is not controlled by you, it just has a lot of cool looking fighting cutscenes. Instead you control the characters like in an RPG, choose which card to use, pick an action and so forth.. I hate menus.. I want live action!

At least the game has some pretty rad tunes ^_^ Check out the video below to listen to some of the music :) It’s awesome! Apart from that I wouldn’t really say it’s playable or fun without an extensive knowledge about Dragon Ball lore or the Japanese language.. In the main fighting menu the only thing I understood was ステータス (status) and アイテム (item). The others seemed to be various attacks or card picking.. I have no clue what the cards are about, some of them seemed to give me special attacks.. at the end though I just fought for my blonde dude to get killed so I could turn it off XD

I got to see a dragon though, who gave me free cards! The game really has some nice sprites :)

Check out my first attempt at this game here, and listen to the nice music at least ^_^

The next Famicom impression is on Suikoden: Tenmei no Chikai 水滸伝・天命の誓い (KOE-XJ) by Koei from 1989 and… I seriously have no clue what is going on in this one..

It’s some sort of RPG/strategy/story-telling nonsense about ancient dudes in China.. so.. yeah.. this:

I don’t know if I chose the wrong menu or if there’s some kind of intro that just lasts FOREVER.. but I didn’t even get to do anything! I just looked at the numbers scrolling in the bottom left, and once in a while a dude popped up, with numbers attached to his card, and that was the only time I got to interacet: I pressed a button and his card went away and the numbers began scrolling again until another dude popped up. FUN!!! *not*… I hate strategy… especially non-interactive types…

Here’s a video of the few minutes I could stand of this game… at least some of the music is decent! o_O