Yesterday I played through Psycho Fox for Sega Master System.

I’ve visited this game many times, and I always really liked it. It is however pretty hard, the steering is stiff and it’s hard to maneuver the characters, which makes you inevitably fall into the arms of death. This has always led me to give up after a few stages, but not this time! (Thank heavens for unlimited continues!)

Psycho Fox is a side scrolling platformer, with good graphics for the 8-bit era and cute characters with some nice ability differences. You can eventually play as four different characters and change in stage whenever you have a ladder. You just have to press the PAUSE button which is on the Sega Master System located on the console and not the controller, just right next to the reset button.. so don’t be hasty!

You start off playing as the Fox. His speed and jump is moderate. He’s the character in the middle, which you eventually will end up not using, unless you need a continue and start off without ladders again.. This character is definitely the cutest though in my opinion!! ^_^

And as soon as you have collected a ladder, by either killing enemies or finding it in an egg you can change to either one of the other three characters. The Hippo is only good for one thing, which is breaking stone walls. Apart from that ability he is the slowest character. 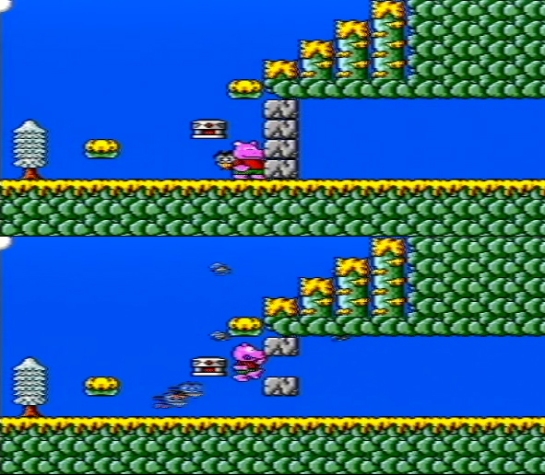 Then there’s the Tiger, he is by far the fastest character, but his jumps are as good as the Fox’s. There are a few areas in the game where he can be beneficial, but mainly I preferred playing the last character.

The last character is the Monkey, he runs like the Fox but he jumps spectacularly! This gives you an advantage on most places in this game. Since the movement is still pretty stiff and jumping far won’t be possible unless you have some space to make a run for it first the Monkey gives you a chance to survive in some places where precise jumping is needed, since he has a little more airtime for you to steer him towards where you want to land.

There are 7 bosses in total in the game, which means 7 worlds each with 3 levels where you always encounter the boss at the end of level 3. The first three bosses re-appear on stage 4-5 and 6, and the 7th boss is unique.
The first boss is a thing made of layers that jumps around, you will have to shoot off his middle layers by jumping on a little canon. He will re-appear on stage 4, but this time sliding towards you instead of jumping.

The second boss is a mosquito which you will have to spray 3 times with the giant bug spray can. He will re-appear the same on stage 5.

The third boss is a giant tiger-cat-thing that just runs back and forth, you just have to jump on him three times. This doesn’t sound too hard, but in this game, with the shitty movement, and not to forget ONE HIT AND YOU’RE DEAD AND HAVE TO START FROM THE BEGINNING OF THE STAGE, then it is actually quite frustrating at times..

The final boss is a giant Fox! I always thought that you were playing as the Psycho Fox, but I guess it’s the Fox at the end who’s Psycho..

This guy shoots lightning bolts at you and you have to punch the container on the ground to shoot bouncing red balls at him. After just three hits he’s dead. However, watch out for that lightning.. this took me quite a lot of tries.. and having to run through the entire stage after getting hit once is not uplifting I tell you….

It felt really good after having finally beaten the game though! =D

This game had the weirdest ending..

A Sumo-like fox stomping his feet and clapping his hands in slow-motion with a bunch of random animals and a retarded horse.. shouting DOSUCOI! I don’t know what that’s supposed to mean.. and the credits after that where quite entertaining, there was an animated polaroid camera showing pictures of each of the creators. Imaginative ^_^

Here’s a video I put together of the gameplay:

Here’s another video of all the full length boss fights:

And here’s a final video of the entire ending: