For christmas I got an Amiga CD32, boxed and in new condition, from my fiancé. Unfortunately when they stated that it was “new”, they didn’t mention that they had opened the box and removed the power supply o_O Also they didn’t mention that it probably was an NTSC machine, since the antenna cables that came with it where the old style american ones.. I had to go order a new power supply, and once I got it I was excited to see if it worked. After some fiddling I realized that the composite cable they had added with it wasn’t a working cable, once switching it out for one of my personal ones I got the CD loading screen.

Now I wanted to try out an old Giana Sisters CD game that I’d had for ages.. But apparently this Giana Sisters game was not an Amiga CD32 game, even though it read “Amiga” somewhere on the cover.. I’ve always wanted to try this game again, I remember playing Giana Sisters once when I was a kid and I loved it, so I’ve been looking to find a copy, but so far this is all I have, a collection CD for something “Amiga” that doesn’t work on the CD32… So now I didn’t have any games for the system :/

I turned to eBay for a quick fix of some Amiga CD32 games, but the supply was scarce.. I bid home Total Carnage and after a while it arrived in the mail. I couldn’t get it working at first but my helpful instagram followers instructed me that the Amiga CD32 is “region free”, but you have to switch between the regions in a lock screen, this can be entered by connecting a mouse to the Amiga CD32 and pressing down both buttons on the mouse simultaneously. They said it had to be during startup, but I managed to enter it even after the start screen had appeared. Once in there you just steer to the side to switch regions. After this my Total Carnage game worked ^_^ It was an ok game, probably really cool back when it was new, but I got bored because it didn’t have music during stages and the sound effects were really clunky :/ I’m just picky like that, I want an awesome soundtrack when I’m going on a kill frenzy in games XD 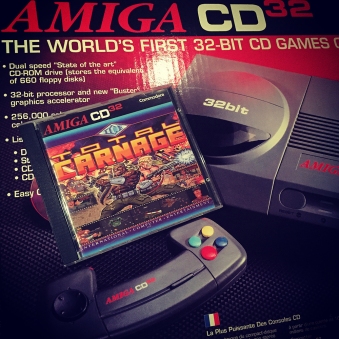 A while later I bought another game from eBay, not knowing what it was I just had to get it because of the name and the cool cover ^_^ It’s called Whale’s Voyage :) It was an adventure game, it seemed to have been made by Germans, all the voice overs had really German accents XD The game started out with you having to create a couple of characters.. this was quite elaborate, you had to choose a father and a mother. The fathers looked like an enemy from doom, Kramer, Paul McCartney, Val Kilmer (or possibly Christian Slater) and Eugene Levy XD This type of game style is quite boring in my opinion though.. I don’t like just going through menus, I want live action! XD I managed to make it from the menus onto the surface of an actual planet after I had created my crew.. it then turned into a dungeon crawler type of game, except it was in a city, all the doors were locked, and I couldn’t interact with people I met, or even walk past them >_< Boring…

Enough with all the choices 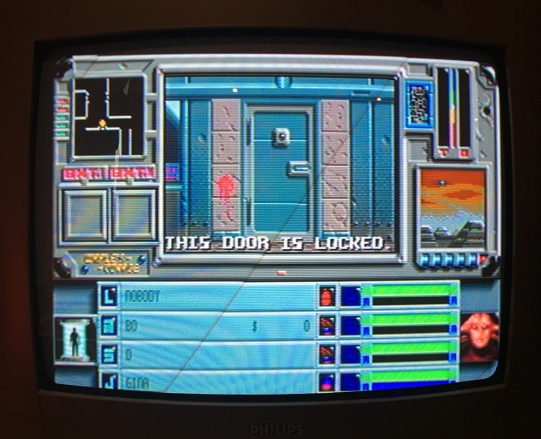 The controller for the Amiga CD32 is really weird looking, but it’s surprisingly comfortable to use! :) Now I just need to find a fun game to use it with XD
What are your experiences with the Amiga CD32? Does anyone have any recommendations of great exclusive games for the system? ^_^ 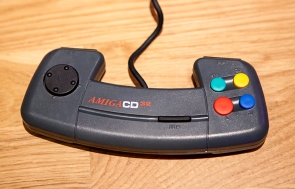