Making reviews and wanting to be able to record what I’m playing so that I can show through video what the games are like. This has turned out to be a difficult problem to solve, but today I managed to solve all my previous issues.. with a little help from my friends ;D

I started out trying to record with a film camera, filming the TV screen. This was crap. Crappy quality, shaky, bad angles, ugly sound.. etc. So i moved on to borrowing my boyfriend’s brother’s HDPVR, this worked on and off, didn’t work with my NTSC or japanese systems, only my PAL. The recordings got a constant humming in the background sound and it was also a hassle to connect the thing, cords from the HDPVR to the TV, to the laptop (not being able to use my stationary computer=inconvenient) and to the console. I then had to transfer the files from my laptop to my stationary to work with them.

After talking to some stores, I got convinced to buy a DVD recorder. This worked, but not with my NTSC or japanese systems.. also it was a hassle having to record on DVD’s then transfer the files to my computer and convert them to files I could use. The recordings also carried a constant humming sound in the background and the image was laggy..

However the DVD recorder purchase was not in vain. A friend advised me to get the Elgato Video Capture from the apple store. 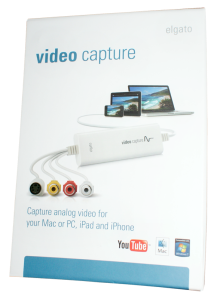 When I first connected it to the system and straight into the computer it didn’t work. Apparently because the consoles have some built in anti-piracy code (according to my engineer friend). The image looked like this and froze immediately:

BUT when I connected it through the DVD burner into the console the image was perfect, no lag, and I could play the games straight on my iMac, while recording!

It doesn’t look too messy, not too many cords or machines to connect together, and best of all, the sound is perfect!

I’ve been playing a bunch of Streets of Rage on my iMac tonight, with headphones, and OMG that games’ music is just so awesome! This is what the image quality looks like:

This is totally ok for my purpose ^_^

Now I haven’t had time to try it out with my NTSC machines or the japanese yet, but I hope it will work o_O The Elgato is said to be able to take all formats, however I’m not sure if the DVD burner might f*ck it up..
I’ll update once I find out ^_^

This cover makes it look way more interesting than it actually is 😆 played some Rolling Thunder 2 tonight and gave up on the second stage 😅 Have you played it? What’s your thought?
In 3 hours (21:30) I’m joining in on @gaminggrannar’s live stream on YouTube! I will be doing a tour of the game room :) don’t miss it!
Which aesthetic do you prefer? The blue Sega Mega Drive spines, the red Sega Genesis or the mixed Japanese Mega Drive spines with giant katakana, hiragana or kanji letters? I really enjoy the Japanese ones 😍
She beat the first stage in Sonic 2 on her first attempt, beat the first boss on her second attempt 🙌😆 Mommy’s girl! 👌😄🕹🎮👾
My Philips Videopac G7200 has died, it won’t start 😔 Hopefully it’s a minor problem that someone more technical than myself can solve 😅 it’s been one of the most frequently played systems in my game room, every visiting person has gotten to try it, and play some Race 👌 Race is by far my favorite racing game! Even though the screen was in black & white compared to the regular Videopac G7000 which has color, the screen was always perfectly crispy and sharp, and it was a joy playing games on it 🤍🖤
This month’s Wootbox is retro gaming themed! 😄🙌 It’s got it all! Super Mario ice cube tray, Zelda stickers, Pikachu figure, a cute game boy themed pin and an awesome Pac-Man T-shirt 😍 @wootbox was kind enough to offer my followers a discount code! The code is 0221RETROG5 in case you want to get the box yourself👌☺️ Find the link in my bio 👉 @retro_gaming
So happy she’s loving the new OG Super Mario Game & Watch 😍 gotta teach ‘em the originals 👌☺️
What a surprise I received in the mail today! 😃Yet another soccer game from @joey.jo.jo.junior.shabadoo ? No! It’s Rambo III / Tetris for the Mega Drive, a Tetris style handheld and StickerZ!!! Loooove STICKERZ!! 😍❤️ thanks a bunch @joey.jo.jo.junior.shabadoo 🤗 I soon have a complete PES / FIFA collection 👌😂
Been playing some Battle Kid 2 on the NES with a friend tonight, it’s ridiculously tormenting 👌😂 Have you ever played it? Or beat it? 😱
Beat my personal best at Dragon Fire on Atari 2600 today! ✌️ 8970! @nesfrk can’t keep up 😆 Have you ever played it? What’s your best? ☺️ It’s a brilliant game!
#topnine2020 Here’s my most liked pics of 2020! Thanks everyone for liking and commenting! The Instagram retro game community is amazing and I love sharing the joy of retro games with everyone and seeing all the wonderful retro gaming goodness you all post 🤗 HAPPY NEW YEAR!! ✨
Other games and systems they got to try out today was Vectrexagon on the Vectrex, Twinkle Star Sprites for Neo Geo, Spaceman Splorf on the C64 and Coryon for PC Engine 👌☺️
#metalslugmonday teamwork playing Metal Slug on my Neo Geo cab :)
They also got to try out some Atari 2600 hits like Spider Fighter, Dragon Fire, Combat and of course E.T! 👌😆
Had a friend over with her kids today, I love showing them the history of video games! And it’s so much fun to see them play old school classics :) of course they had to have a match in Pong 👌☺️🖤🤍