Adam over at 1 UP Card was kind enough to send me a sample of his product!

The 1 UP Card is supposed to be an alternative to Q-tips for cleaning retro video game cartridges. I have actually grown quite attached to my Q-tips, I’ve found a brand at my local super market (the more expensive brand) that works great! The stick is stiff and doesn’t bend too easily and they do not generate any fuzz, the cotton merely stays on the Q-tip ^__^ I am however open to try new things! :D So here’s what the 1 UP Kit looks like:

There’s a fluid bottle with 1.25oz of 99% isopropyl alcohol. The dispenser is really neat and easy to use, and it doesn’t create as much of a mess as my giant bottle of alcohol that I usually use. However, I’m afraid it won’t last as long ;D 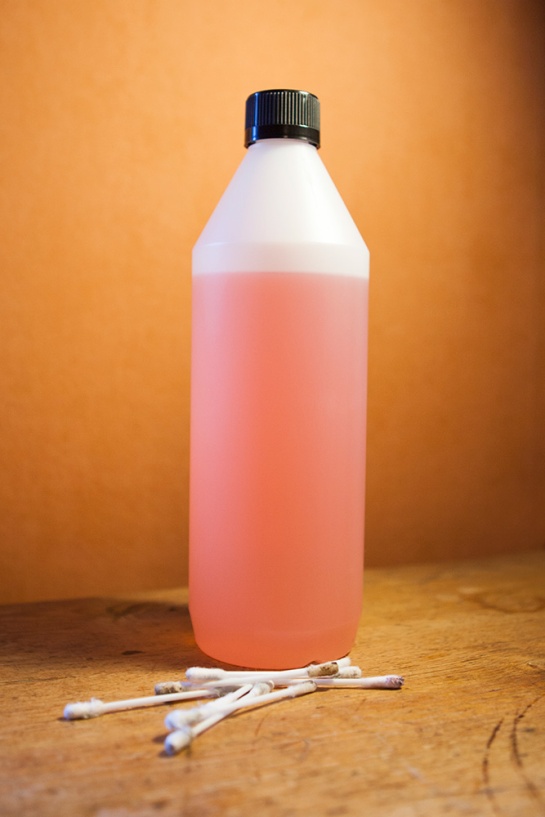 You also get a 1 UP Card with a fluid side and a dry side for rubbing the connections on the cartridges. On the pic below I’ve wet the fluid side ^_^ 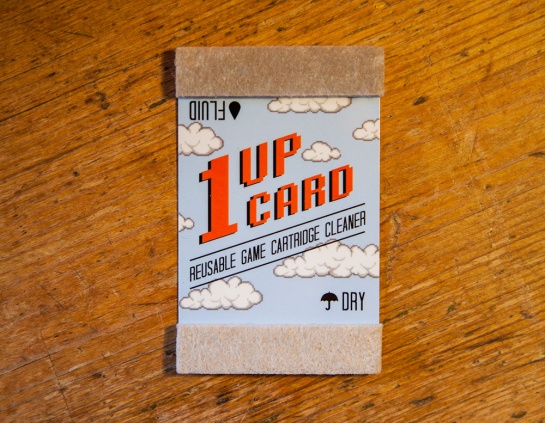 So I’ve tried this out! First of all I tried an NES game. The pad and the card fit perfectly. Rubbing was smooth and fast. You got a better grip than with a q-tip and could therefore rub faster. Another benefit is that you managed to get the edges of the pins, which is usually a bit of a drag with a q-tip since it easily falls between the gap at the end of the pins before the plastic.

After this I tried out the Game Boy cartrdige! Here the 1 up card did not fit, I managed to force a corner of it in there, but the 1 up card is still wider than the cartridge. So here it’s still more effective with 1-tips.

Next I tried a Famicom cartridge! This worked perfectly! I think it’s got kind of the same dimensions as an NES cartridge in the space between the pin connector and the plastic.

Then I went on to some heavy duty stuff! I just got 5 really really dirty Neo Geo MVS cartridges of Metal Slug 1 – X in the mail today! The 1 up card was smaller than most of the gaps, but on one particular cartridge the last pin towards the plastic had a really thin gap where I couldn’t reach with the card. Apart from that it went well. Here it was much faster working with the 1 up card than with q-tips. I usually spend around 20 q-tips on one Neo Geo cart… 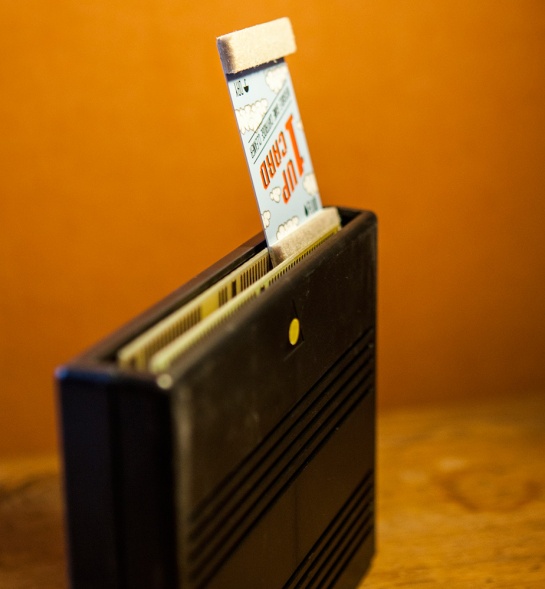 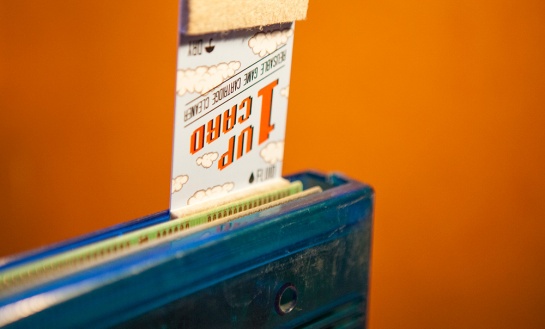 After these games (1 NES, 1 Famicom and 5 REALLY dirty MVS carts) the card looked like this: 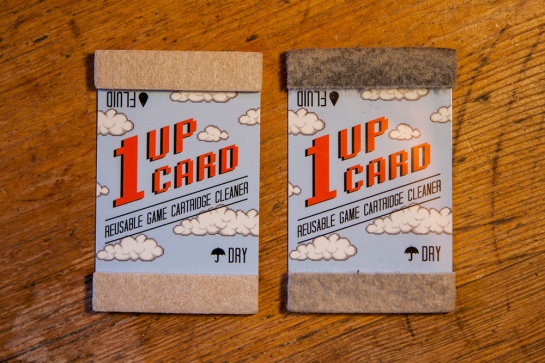 What bugs me with this apart from working with q-tips is that you can’t really tell when the game is thoroughly clean. When I use q-tips I pick a new one until they don’t turn dirty anymore, then I know that the cartridge is as clean as can be. Sometimes it’s enough with 2 q-tips, sometimes I have to work through 20! Here, the 1 up card looks dirty after a while and you won’t know if the new cartridge you’re cleaning is clean enough or not…

After this I picked a new 1 up card because I felt the other one was dirty. On Adam’s site he states that it’s ok, because the dirt goes into the pad and stays in the bottom.. but I still felt like it was dirty, and didn’t wanna rub that extreme MVS dirt onto the other less dirty carts ;D So I went on with a new 1 up card on a Sega Mega Drive (Genesis) cartridge! It worked, but you had to force it down a bit for it to fit.

After this I tried Sega Master System. In the front there was lots of space for the 1 up card to fit, but in the back I had to force it down even more than on the Mega Drive (Genesis) cartridge. It worked though, with some force ;D

Next up was Super Nintendo! Also very tight to fit the 1 up card. Like the back of the Master System. Had to force it in there, but once in it worked.

Then I tried a Nintendo 64 cartridge. A little bit better than SNES, but still tight.

And finally an Atari 2600 cartridge! :D These are difficult as is, since you have to push down the plastic to reveal the pin connectors, but I would say that it’s easier with the 1 up card since you can keep pressing the card down while cleaning to keep the pins exposed. When using q-tips you will have to hold it down simultaneously with your other hand.

After this the second card I had used looked like the picture below (middle card). These latest games I cleaned though were from the collection, however not used in a while, so they’ve been thoroughly cleaned once before, but of course collect more dirt by just hanging around.

After a final super-rub of the first NES cartridge I tried to rub it with a regular q-tip and the alcohol I usually use just to see how clean it was, and below you can see the result. Barely any dirt left ^_^

Now for the final test! 1 up card also states that it removes permanent marker, stickers, and grime from your games. I brought forth NES cartridges with stickers, gooey residue and permanent marker scribbles :D

First up is the sticker on Caveman games! After some rubbing and scraping with my nails I got it off. I do the same with q-tips which works just as well. The benefit with q-tips is that the rubbing surface is smaller, which makes it easier to avoid the actual label sticker on the cartridge (which you want to keep on there ;D). Apart from that it worked fine.

Then onto the old unidentified sticker residue on the back of NES cartridge. This one did not come off! I rubbed for over 5 minutes and scraped it, and nothing happened. If anything, it got a little bit cleaner ;D haha

Then the permanent markings ^_^ These came half way off, they revealed what was written underneath with an apparently more permanent marker! haha ^^ The sticker residue in the bottom came off nicely though. The pad was completely black after this procedure and while rubbing it on the sticker the surface got black smeared all over it.. so I will not re-use this 1 up card for any pin cleaning..

In my opinion the 1 up card is a good product! It’s faster than q-tips and less messy. It’s definitely a more expensive solutions though. I’ve used maybe 1/10th of the fluid only tonight, compared to my big bottle which lasts FOREVER! ;D The 1 up card kit costs $12.95 with one bottle and 1 card, and $15.95 with 3 cards and a bottle. Refill cards (set of three) costs $9.95. So it’s still not super expensive, for a small collector this is definitely a great and simple solution to cleaning your games! For me though, who get games in the mail almost on a daily basis, it would not be cost effective (especially not with shipping to Sweden) ;D

Something that was nice is that I didn’t have to re-wet the fluid part of the card, it stayed moist for the entire test! This saves time compared to dipping q-tips every 30 seconds…

I really liked the packaging of the product and it works with almost all retro game cartridges, you can tell that it’s based on the NES though, which it fit perfectly in. Unfortunately not with the Game Boy games though, but these are so fast and easily cleaned with a q-tip anyway so it doesn’t really matter.

I will save and continue using my kit for my Neo Geo games! Here the kit was a major time saver and q-tip saver ;D haha ^_^