At my last retro gaming event a friend thought I should get a game called Gain Ground for the Sega Mega Drive. He said it was a great game. The only one I could find at that time on Ebay was a japanese version, so I bought it, and while I was at it I checked out the sellers other auction.. and then I couldn’t restrain myself! 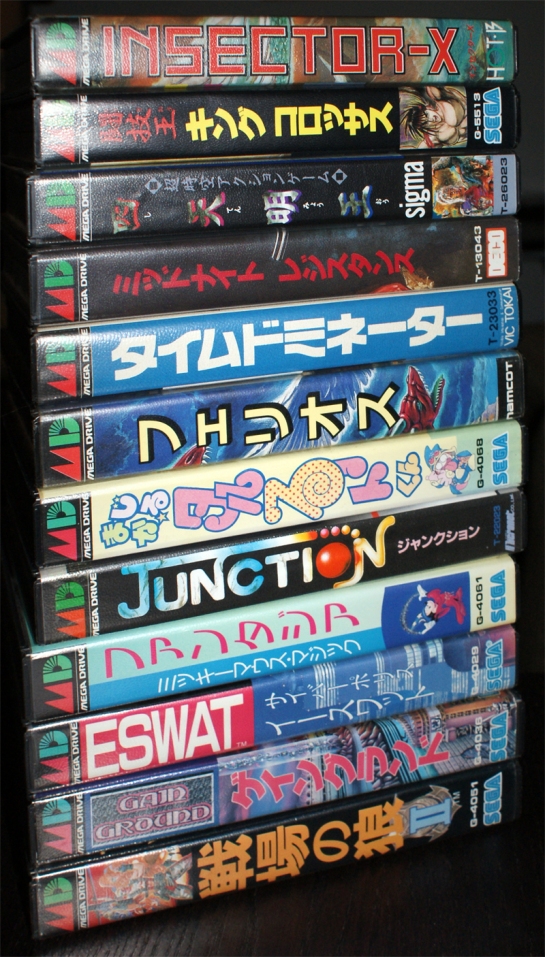 In the shopaholic-rush that I get sometimes.. I accidentally bought a game I already had.. Fantasia >_< which is stupid hard! Though this is the Japanese version instead of the PAL, perhaps it’s better.. but I doubt it! I also got Cyber Police ESWAT and of course the Gain Ground that I set out for ^_^

I also got Insector X, which I guess is a sequel to the Famicom game with the same name. I recently got the Famicom version and I liked that game so I just supposed it would be even better in 16-bit! :D King Colossus and Senjo no Oukami II also seemed interesting, I just watched brief youtube videos, and I basically buy anything that is platforming, puzzle or shooter ^_^

Magical Taruruto-Kun is a popular series on the Famicom, so bought it cause I recognized the name. Junction seemed like a cool arcade/puzzle game, kind of like Marble Madness but kind of different, I can’t tell whether it will be amazingly cool or just awful until I try it out though ^^ Phelios I had been wanting to get on several occasions and this time it was just reasonably priced ^_^

And last but not least Shiten Myooh, Midnight Resistance and Time Dominator. I just HAD to get Shiten Myooh because of the funny name  and cool box art ^_^ and Midnight Resistance looked kind of like Contra, can’t wait to try that out! Time Dominator looked like a total ripoff from the Sonic games! Really fast and similar graphics and gameplay.. hmm..

Well I just wanted to share what was in the mailbox today, now I’m off to try them all out! :D and try to figure out how to capture those friggin’ screenshots with COLOR! ;P