Next up for Famicom Impressions is King of Kingsキングオブキングス. It was a game I didn’t have, looking at the artwork on the cartridge made me quite positive it was some kind of strategy game (I’ve learned to tell the difference on these Japanese games with their beautifully deceiving artworks XD). But you never know! I could be wrong, so I had to try it out for myself to be sure :)

Just as I thought, it was some kind of strategy and turned based war game. I was quite clueless to begin with, I tried pushing all the buttons and got to various menus. Thankfully the menus were not as extensive as in many other strategy games. I tried various options and figured out that I could buy troops for my King! I bought some of each kind and started placing them out on the map, moved my king around to various towns on the map and got to raise my flag :D

Then it took a while before I could figure out how to end my turn.. I eventually found it in the Select menu, the second from the bottom. And here’s where the game got reeeally boring and long >_< Once it was the computers turn I had to sit and wait for him to do ALL of his moves with ALL of his characters.. each turn he had he got more and more troops and his turn just grew longer and longer. And it wasn’t sped up or anything, he was just as slow on deciding as me almost!! I couldn’t press anything to skip it :/

There’s of course battles as well, but they’re all randomly AI controlled, you can just sit and watch and hope for a positive outcome.. In this game you don’t do anything except move around characters on the board and buy more characters.. as far as I could understand at least. I made the mistake of moving my King too far from my main castle, because that’s the only place you can buy more troops..

I managed to withstand 3 or 4 turns of my own.. then I was so bored out of my mind that I just shut it off.. I would say it’s fairly playable, even if you don’t understand Japanese, just guessing your way through menus gives figurative results so you can understand what you just did basically. But it’s definitely not fun in my opinion.. just boring.. I’m not much for strategy games in general though. It was probably great at it’s time for people into that kind of stuff :P

Here’s a video of my first attempt at this game. I’m surprised I didn’t shut it off sooner XD

Like Loading...
Somebody told me that Pac-Land had been an original arcade, preceding even Super Mario and being one of the first side scrolling platform games made. This got me curious, so I went on wikipedia and gained knew knowledge about the game, the story and ALSO the gameplay! 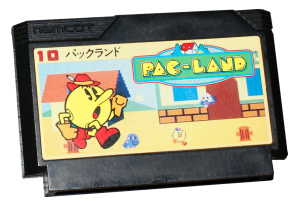 Apparently when you reach the end of stage 3 (Fairy-Land) you have a fairy in your hat which Pac-Man gives to the Fairy Queen and receives Magic Boots in return that can make him jump repeatedly.. this is definitely NOT obvious in the game, there isn’t even a slight animation of anything out of the ordinary happening. Therefore I never made it any further than stage 4, where there’s immediately a giant gap I couldn’t get passed.

Now being able to jump more than once changes everything, I beat that stage in the first try! But then there’s more stages with the same objective, reach Fairy Land, get boots, go back, but they have a higher difficulty level.. so I got stuck on stage 5, where you have once again the ability to only jump ones and there’s a gap that just cannot be crossed.. I give up and this is officially an annoying, frustrating and therefore SHITTY game >_<

Here’s a video of how you get passed the first gap at least, and you get a glimpse of stage 5 ;D It’s also in better quality recording than the last Pac-Land video, but the graphics of the game still suck!! Enjoy!