This weekend I’ve been to Berlin with my friend NinjaBrite, we had a relaxing weekend with a lot of fun. One of the best things we experienced though was the Computerspielemuseum (Video Game Museum). It’s a permanent museum on Karl Marx Allee in central Berlin and it’s got a lot to offer! 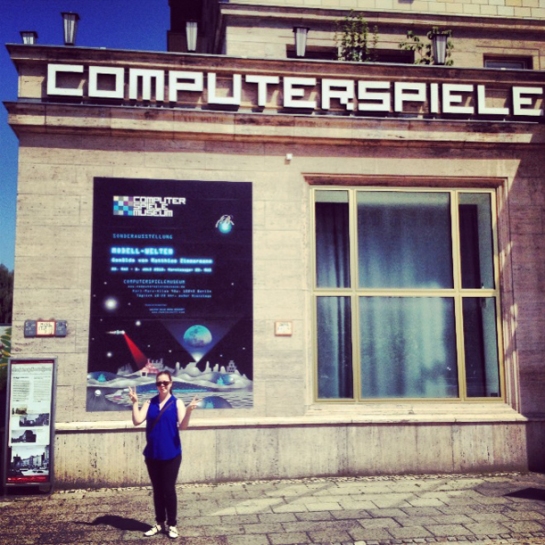 They had loads of retro gaming consoles on display in pretty green boxes, all labeled with the name of the system. I photographed mainly all the ones I didn’t own, so I would remember what to look for next ;D There was only one game displayed in these green boxes, which was Atari’s E.T.! But there were lots of other games there that you could play in other areas. 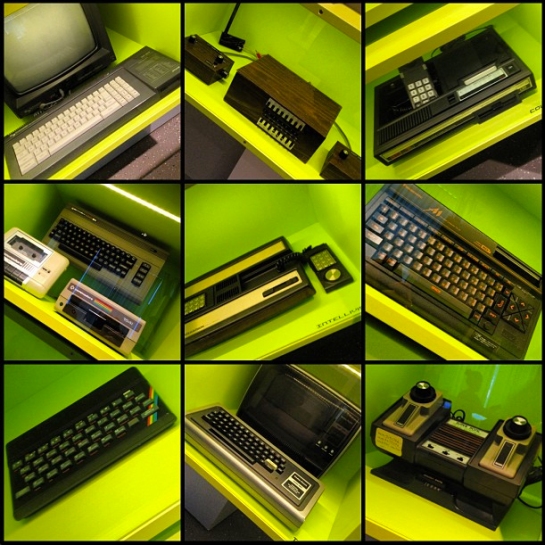 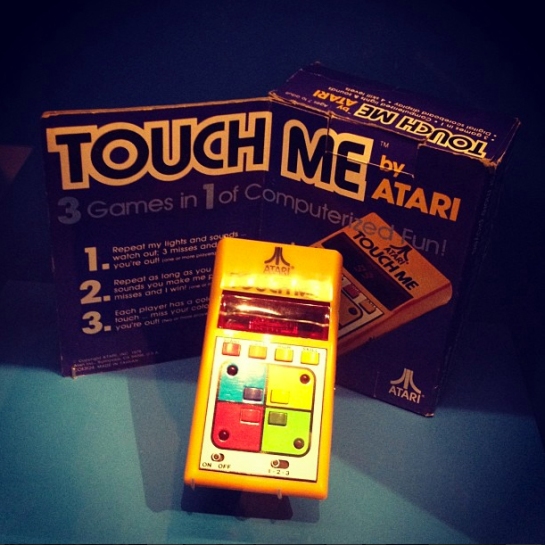 They also had an arcade area with original old arcade cabinets that were free to play!! This was totally exciting for me since I’ve hardly ever gotten to play any arcade machines, except when I was in Japan. The coolest one was of course the original Pong arcade cabinet, and an old spacey green arcade cabinet with some kind of shooter. You only got the try these out on mondays though and we were there on a thursday :( but we got to play a lot of Donkey Kong, Space Invaders II, Frogger, Gauntlet, Asteroids and others ^^ 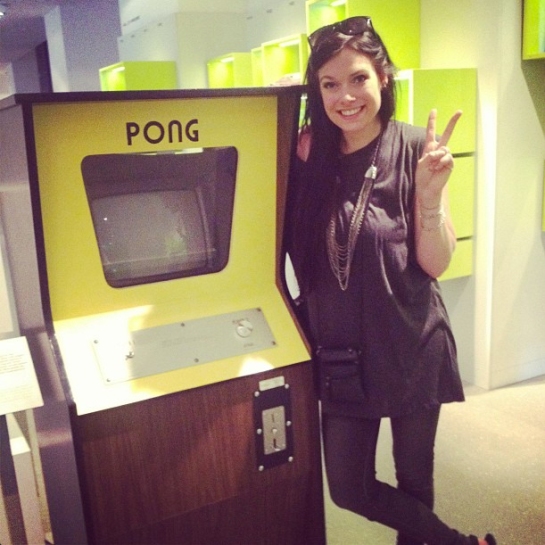 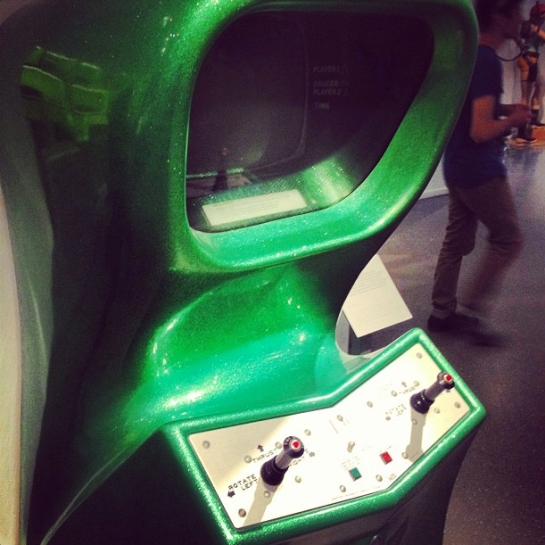 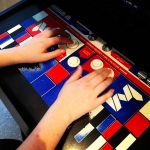 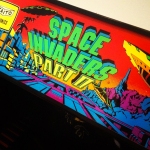 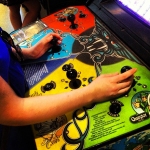 There were a lot of cool things to see, read about and experience. For example they had 4 computers playing Ludo against eachother, a 5 player pong you could try out, a computer you could ask anything and another computer which was impossible to beat!

Immediately at the entrance there were life sized statues of famous characters such as Link from Zelda, Rayman, Jak & Daxter and Lara Croft ^_^

They also had a GIANT Atari Joystick! It was even working and hooked up to an Atari 2600 Junior and you could play Pacman with it ^_^ I of course had to try it out! It was difficult but worked well! 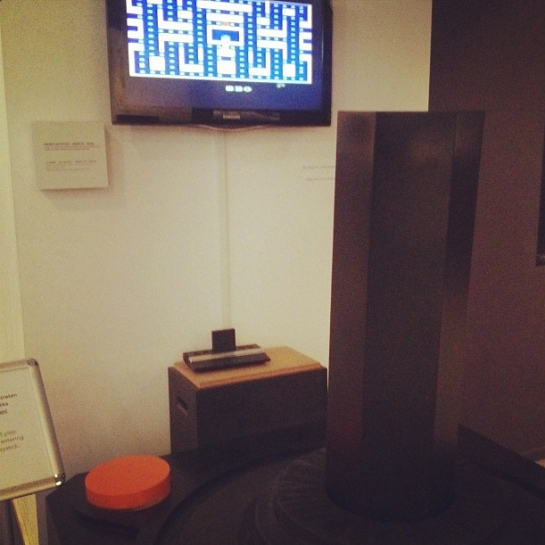 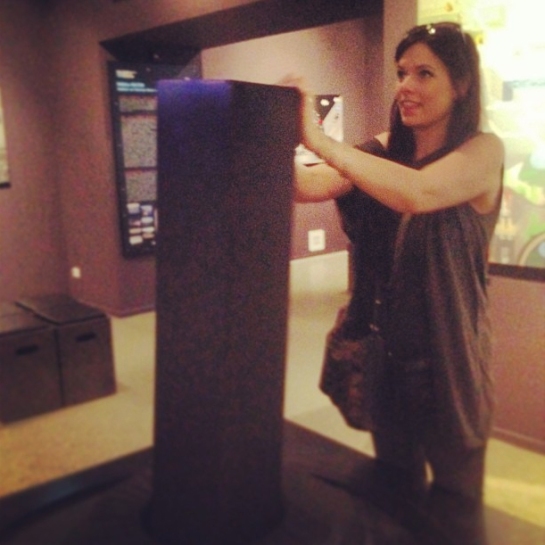 Another cool game we tried out was Rom Check Fail! This was a recently made game (don’t remember by who..) that was basically a bunch of old classic games merged together in one big glitch! Really hard but really fun to play ^^ One second you’re playing as Pacman in Mario world, the next your the Asteroids ship flying around in Hyrule haha ^_^

This was a GREAT museum! And I recommend anyone going to Berlin to go see it ^_^

My Philips Videopac G7200 has died, it won’t start 😔 Hopefully it’s a minor problem that someone more technical than myself can solve 😅 it’s been one of the most frequently played systems in my game room, every visiting person has gotten to try it, and play some Race 👌 Race is by far my favorite racing game! Even though the screen was in black & white compared to the regular Videopac G7000 which has color, the screen was always perfectly crispy and sharp, and it was a joy playing games on it 🤍🖤
This month’s Wootbox is retro gaming themed! 😄🙌 It’s got it all! Super Mario ice cube tray, Zelda stickers, Pikachu figure, a cute game boy themed pin and an awesome Pac-Man T-shirt 😍 @wootbox was kind enough to offer my followers a discount code! The code is 0221RETROG5 in case you want to get the box yourself👌☺️ Find the link in my bio 👉 @retro_gaming
So happy she’s loving the new OG Super Mario Game & Watch 😍 gotta teach ‘em the originals 👌☺️
What a surprise I received in the mail today! 😃Yet another soccer game from @joey.jo.jo.junior.shabadoo ? No! It’s Rambo III / Tetris for the Mega Drive, a Tetris style handheld and StickerZ!!! Loooove STICKERZ!! 😍❤️ thanks a bunch @joey.jo.jo.junior.shabadoo 🤗 I soon have a complete PES / FIFA collection 👌😂
Been playing some Battle Kid 2 on the NES with a friend tonight, it’s ridiculously tormenting 👌😂 Have you ever played it? Or beat it? 😱
Beat my personal best at Dragon Fire on Atari 2600 today! ✌️ 8970! @nesfrk can’t keep up 😆 Have you ever played it? What’s your best? ☺️ It’s a brilliant game!
#topnine2020 Here’s my most liked pics of 2020! Thanks everyone for liking and commenting! The Instagram retro game community is amazing and I love sharing the joy of retro games with everyone and seeing all the wonderful retro gaming goodness you all post 🤗 HAPPY NEW YEAR!! ✨
Other games and systems they got to try out today was Vectrexagon on the Vectrex, Twinkle Star Sprites for Neo Geo, Spaceman Splorf on the C64 and Coryon for PC Engine 👌☺️
#metalslugmonday teamwork playing Metal Slug on my Neo Geo cab :)
They also got to try out some Atari 2600 hits like Spider Fighter, Dragon Fire, Combat and of course E.T! 👌😆
Had a friend over with her kids today, I love showing them the history of video games! And it’s so much fun to see them play old school classics :) of course they had to have a match in Pong 👌☺️🖤🤍
Merry Christmas & Happy Holidays to you all! 🎄❤️💚
Got myself an early Xmas gift 😜 What’s your opinion of the Evercade?
Now this was the highlight of the evening for me 😍 also a Mega Cat Studio release, Tänzer 👌🥰 what an amazing platformer! Reminded me of Strider, so fluent and fast paced! So much action! And with that 90s techno beat! 😍🙌 wow ❤️🥰 Pure joy!
Dev Will Too for the Sega Mega Drive, also from Mega Cat studios :D really cute platformer with nice controls, but we got stuck on the first boss though, no clue on how to beat it 😅 anyone else tried it?